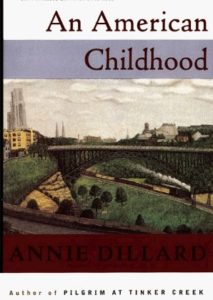 Student Q: Explain the meaning of the paradox “seldom being happier since.”

I believe you are referring to a quote from Annie Dillard’s memoir An American Childhood that states, “In winter, in the snow, there was neither baseball nor football, so the boys and I threw snowballs at passing cars. I got in trouble throwing snowballs, and have seldom been happier since.”

A paradox is a seeming contradictory statement, but one that houses an element of truth. One would think that a child getting “in trouble” would be an unpleasant experience, a memory not to be savored; however, Dillard reflects on this event of her childhood as the happiest one she’s had thus far. That seems like a contradictory notion. Not until taken in a broader context can truth be extracted from the statement.

The happiness Dillard feels looking back is likely a testament to the lack of fun abandon found in her adulthood as compared to the innocence prevalent in her childhood. Further, note that her happiness then was despite the lack of tangible, lasting toys that come at a monetary price. She and her brothers were able to use a fleeting element of nature to make lasting fond memories.

I hope you find this explanation helpful.